The Obama era will come to a close next year. His presidency has provided the backdrop to some of the most important innovations in racial and ethnic politics research. In the last decade, with the rise and pervasiveness of online campaign websites, political scientists have had unprecedented access to information about lower level candidates in the United States.

This new information has changed the way we think about racial and ethnic minority representation. In our paper, “Demand and Supply: Racial and Ethnic Minority Candidates in White Districts,” we show that both Latino and African-Americans win as often as their white partisan counterparts in recent state legislative elections. Much like Obama, who won the presidency twice with a white-majority electorate, racial and ethnic minority candidates do win office when they run. We argue that minority representation in the United States would increase if more minority candidates appeared on the ballot. 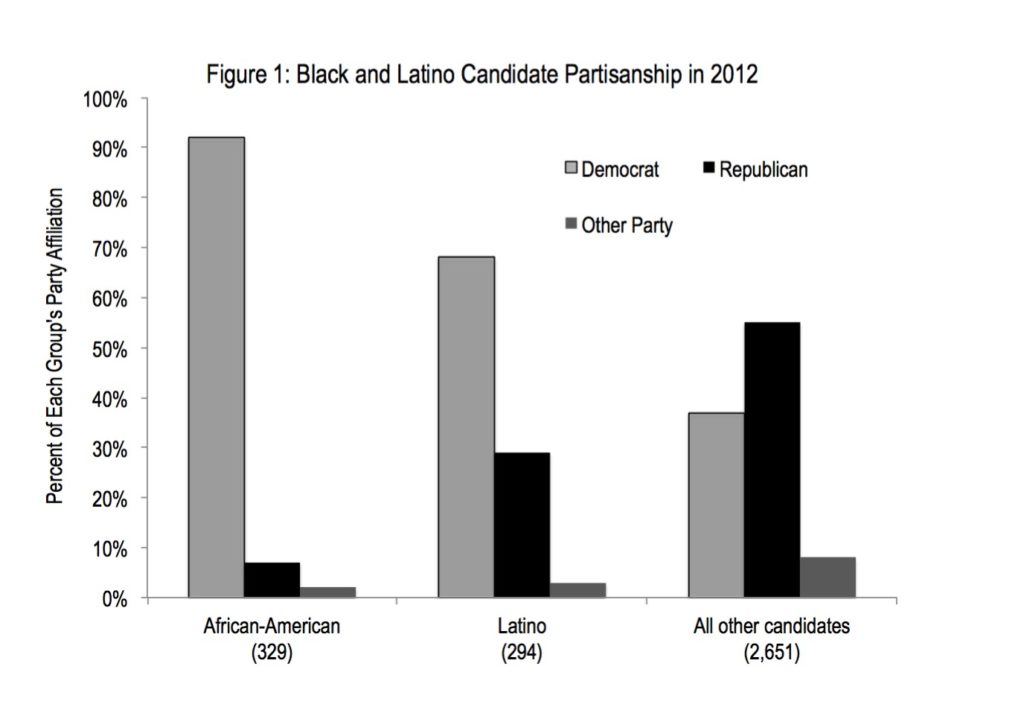 For decades, large-observation studies of racial and ethnic representation have been confined to congressional candidates and campaigns. The scarcity of racial and ethnic minority candidates at the congressional level impeded the development of a generalizable theory explaining how voters and minority candidates interact in different electoral contexts. Now, things are different. The internet fundamentally changed the amount of information that scholars have about candidates for office at all levels of government. This includes race, gender and ethnic information about these candidates. New information is new data. New data equals new places to look for answers to our questions about the role of race/ethnicity and gender in our politics. Indeed, new data allows us to ask questions we could not ask before, leading to new theories.

One of the more exciting places scholars have begun to look for answers is the state legislature. The fifty states produce much more electoral variation than Congress, with roughly 7,000 candidates for office in over 3,000 elections every two years. This variation has produced a new way of understanding racial and ethnic candidates for office.

One of the more counterintuitive findings from this research is that minority and women candidates, when they run for office, perform just as well as their majority-white and male counterparts. For decades, research has shown that minority candidates faced racial bias from voters, and women candidates faced gender bias from voters. Most of this past research was based on surveys, experiments, and small case studies of prominent elections. Newer work however is based on many many more electoral contexts, and shows that despite deep-seated racial and gender bias amongst voters in both parties (which we can detect in surveys and experiments), minority candidates do just as well as their partisan white counterparts in state legislative elections. Voters appear to place party over bigotry and sexism when making their choices. A popular saying in this most recent presidential election was “Party ID is a hell of a drug.” This applies to lower-level elections as well. Indeed, this may be one of the few positive outcomes of our era of partisan hyper-polarization. Voters care more about who the parties represent rather than who represents the party. Our partisan tribes may be racialized and gendered, but this makes black and Latino Democrats and Republicans even more attractive to white partisans. Indeed, it’s likely that Obama’s race was a positive to many Democrats and Independents (Tesler and Sears 2010). 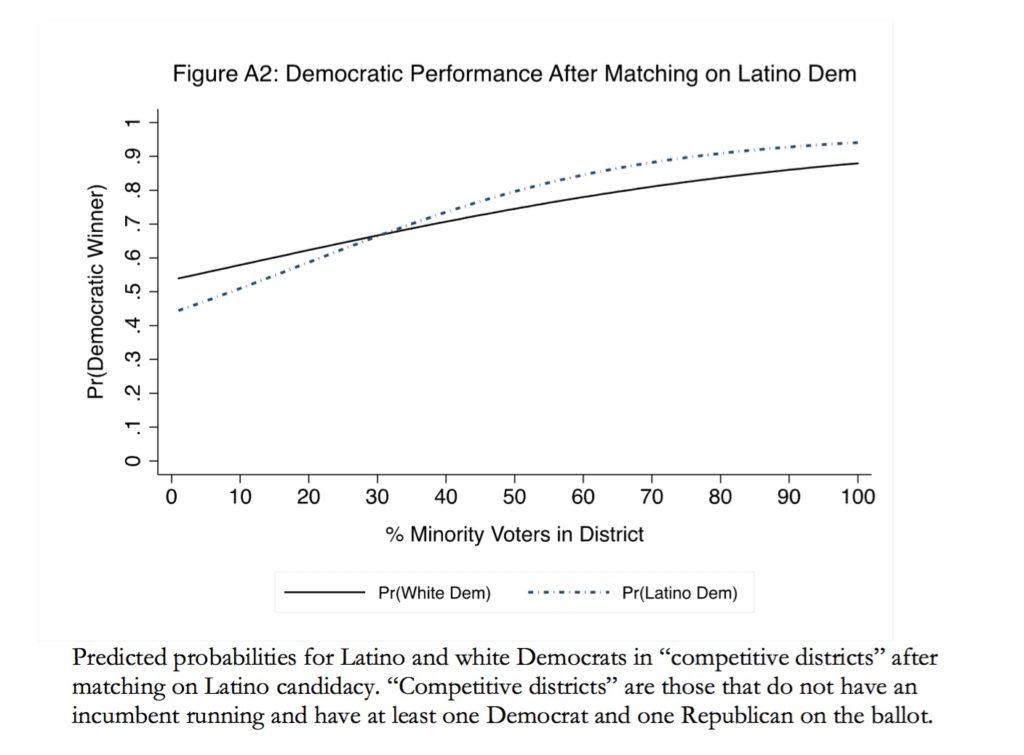 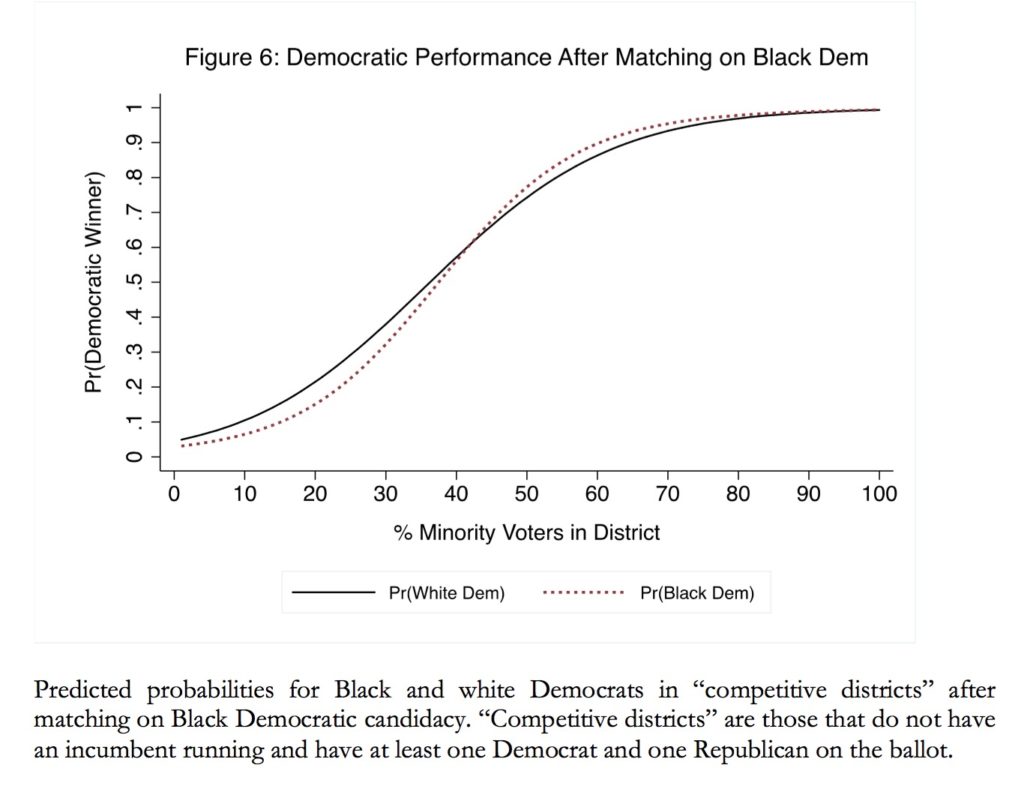 What our research also shows is that minority and women candidates do not run, or are not recruited, for elective office as often as their white and male counterparts. There are many possible explanations for this lack of supply, and testing these potential answers is part of the most fascinating new work in the field. Because of new candidate data, we have a much better understanding of why minority representation still lags, but the main focus now is on minority candidate supply, not white voter demand.

As the Obama presidency comes to a close, new research is looking at why his election victories were more normal than people think despite the incredible amount of overt and covert racism still present in our politics. Indeed, the historic success of minority women candidates was one of the bigger stories of the 2016 election. Catherine Cortez Masto, the first Latina Senator in U.S. history, was elected in Nevada, and many more “firsts” were recorded across the country. The future of American politics will look more like the United States as women and minority candidates are more actively recruited to run, and are supported by both parties.