Nearly forty years ago, an anti-establishment presidential candidate with a Tinseltown resume and the campaign phrase “Let’s Make America Great Again” rose to national prominence. Initially dismissed by his party, opponents, and the media as an uninformed, inexperienced, ideological zealot, who was thus unelectable, he trounced his establishment challengers during the primary and disrupted – at times, outright repudiated – his party’s brand message. Criticized as incendiary, intrinsically antagonistic, ignorant (or minimally, having a loose relationship with the facts), and with supporters derided as racist, anti-women bigots, Ronald Reagan surprised America when he was elected on November 4th, 1980.

The near-deification of President Reagan among both Republicans and Democrats in recent years belies the fear and upset many Americans felt on November 5th, 1980. Coretta Scott King noted she worried Reagan’s election would lead to, “see[ing] more of the Ku Klux Klan and a resurgence of the Nazi Party,” (Skinner, Kudelia, de Mesquita and Rice, 2007, p. 191) and GOP leadership grew concerned as to the effect his hard-line, right-wing positions would have on the Republican Party at-large. America’s fear of Reagan is echoed today as fear of President-elect Donald Trump abounds, particularly among those groups unabashedly targeted by or made to be political lightening rods during his campaign.

The elections of 1980 and 2016 yield interesting parallels. President Jimmy Carter, like Secretary Hillary Clinton, polled uniformly higher than Reagan, like Trump, in the month preceding the election. No two candidates in American history, other than Clinton and Trump, were ever viewed as unfavorably as Carter and Reagan. As candidates, Reagan and Trump ran similar campaigns and faced similar criticisms, particularly from their party – in part, because there is an intrinsic establishment bias against “outsiders”, but also because each candidate’s respective brand actively challenged that of the national party.

This last point warrants our consideration, as understanding the dynamics of intra-party brand disagreement is critical to predicting the impact of a Trump presidency.

In the wake of the party reforms of the 1960’s, political parties have had to retool in an effort to maximize their impact on the political system. One of the greatest assets of both parties is their party-brand – a carefully cultivated system of intangibles (e.g. policy positions, symbols, ideology, tone, etc.) with many moving parts and contributing players, which have the potential to create political capital (e.g. public support for their party, positions, and candidates). The national party-brand is strategically developed by the national organization, fine-tuned by the party’s congressional leadership and the president (when of the same party), and signals what the party represents to the electorate. Tremendous resources are dedicated to branding (and strategically rebranding) political parties as the electorate evolves and when a highly visible party actor publically clashes with the established national brand they diminish the brand’s equity and have the potential to create tremendous disunity within their party’s ranks.

When there is intra-party brand disagreement (i.e. when a candidate’s brand is substantially distanced from or at odds with the party’s brand), what is the long-term effect? What are the tangible, policy consequences of this sort of brand discontinuity? Applied to today’s America – can we anticipate Trump’s candidate-brand (and the policy positions it signals) to permeate the Republican Party’s brand and the policies its leadership champions in Congress?

Knowing unified government does not beget increased policy output (David Mayhew, 2005), our focus must shift to the content of the policy we can anticipate over the next two-to-four years. Understanding brand dynamics – particularly the appreciable effects of intra-party brand discontinuity, gleaned from Reagan’s first term – there is empirical reason to believe Trump’s brand will moderate, in-line with the GOP’s party-brand and that (most) legislation passed during his tenure will not reflect the extremist bent of his campaign rhetoric.

Figure 1 illustrates the scaled ideological distance between the winning candidate’s brand and their party’s brand – a composite measure generated through computational text analysis of the similarity between each candidate’s, congressional leadership’s, and organizational leadership’s speeches and/or platforms in a given year – for each election year since 1972. For interpretational purposes, the ideological value of the party’s brand is centered at zero; a positive deviation reflects a more conservative candidate-brand, and a negative deviation a more liberal candidate-brand. While some divergence is to be expected, both Reagan (1980) and Trump are clearly distinguished as both their campaigns were significantly more ideologically extreme than other president-elects’ and than the brand the national party projected during the election year. 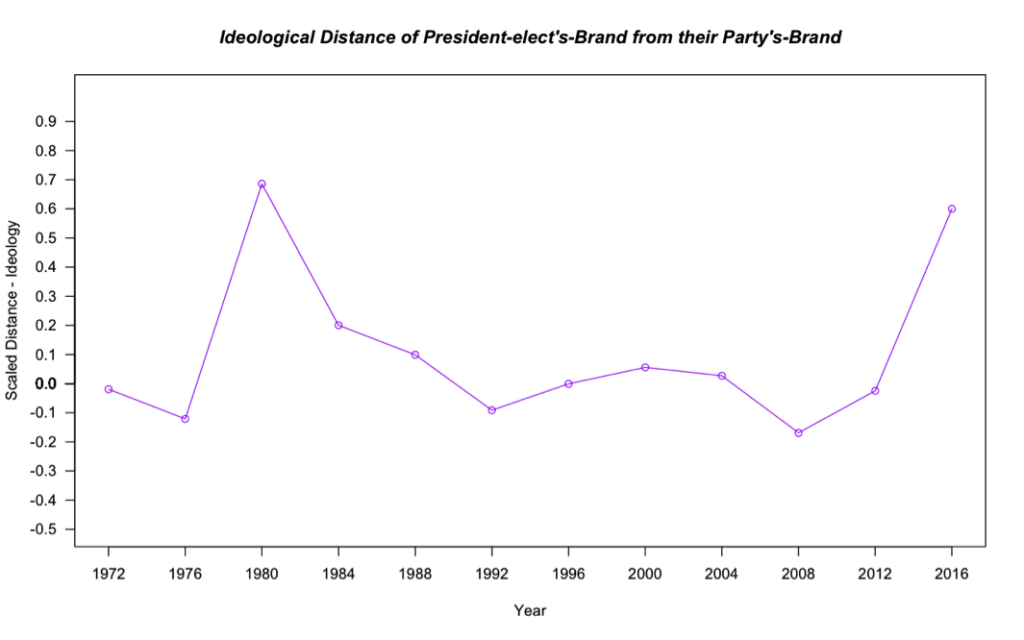 Reagan (1980) and Trump are also the farthest from their party when evaluated along thematic and valence metrics (not pictured), which indicates the dramatically different substance, symbolism, and tone of their brands from that of their party. Moreover, the degree of scaled distance holds when “party brand” is disaggregated and the president-elect is compared only to congressional leadership or only to the national organization’s leadership. By contrast, we observe high levels of congruity between the brand positions of Republican congressional leadership and of the Republican National Committee in 1980 and 2016, respectively. As my research indicates, Reagan (1980) and Trump are truly anti-establishment – not just because they are Washington outsiders without strong political pedigrees, but because their brands diverge tremendously from that of the GOP.

But Reagan did not remain an anti-establishment candidate, which provides important insight as to what Reagan’s case might mean for a Trump presidency. By 1984, there was increased ideological (and thematic) congruity between Reagan’s and the national party’s brand positions. Morevoer, Reagan moved more toward the GOP, than the GOP moved toward Reagan. This finding is especially noteworthy as it represents an atypical convergence; for all other years in which the president-elect enjoyed a second term, the national party’s brand moved more toward that of the president. Though Reagan is credited with securing the solid South and the conservative coalition, the brand of conservatism he championed was ultimately anchored to and reigned in by the established party brand.

This phenomenon – in which the president-elect’s brand, once at odds, converges with their party’s – is supported by the historical representation of Reagan as a pragmatist, willing to compromise and forsake aspects of his own campaign promises when necessary to pass legislation. While Reagan did take hard-line conservative actions in rolling back regulations, dismantling the public mental health system, and aggressively building up the armed forces, he was able to do so because these were policies pre-supported by Republican leadership and thus consistent with the Republican party-brand. In contrast, some of Reagan’s most extreme 1980 campaign promises (e.g. a constitutional amendment permitting prayer in public schools) fell by the wayside as they were wholly incompatible with the vision of the national Republicans with whom he was required to work.

All of this is not to say president-elect Trump will be entirely constrained by the Republican Party’s brand. While Reagan’s conservatism may have been tempered during his presidency, he also solidified the South, which propelled the Republican Party through the 1990’s and, with a few cosmetic tweaks, through the early 21st century. However, the Republican Party has spent the last four years attempting to rebrand themselves as a party of ideas and of inclusion (Growth and Opportunity Project, 2013); an effort that has proven successful across levels of government and is unlikely to be discarded – at least in the short term – solely because of Trump’s election. Furthermore, GOP leaders’ disavowal of many of Trump’s campaign platforms and, at times, his candidacy in general, lends credence to my argument that the Republican Party’s current intra-party brand disagreement will ultimately work against Trump’s legislative efforts.

Those groups of individuals relentlessly targeted by the Trump campaign woke on November 9th upset, scared, and uncertain as to whether there was room for them in Trump’s America, particularly because unified government projects notions of unbridled authority. During the next session of Congress, minority groups are liable to find unlikely allies in Republican lawmakers who will push back against Trump’s extremism when it threatens the Republican party-brand at-large. For those marginalized by the Trump campaign, relying on Republicans to curb Trump’s edge is a predicament that makes for strange bedfellows; it means hoping for a negative check on government action, rather than knowing they have a positive advocate in government. Admittedly, this is an uncomfortable arrangement and unlikely to be of solace to those most at-risk. While minority groups’ fears should not be entirely allayed, the GOP’s intra-party brand disagreement does represent a bright spot; in the absence of divided government, the Republican Party has the capacity to “check” President-elect Trump and he is unlikely to find support for some of his most stringent policies amongst congressional Republicans, unless – like Reagan – he moderates his brand and makes concessions.

Justine G.M. Ross is a Ph.D. Candidate at UC Riverside and specializes in strategic political communications, branding, and political parties.